Like every diktator, this one is rough too, but it can be soft – it has sweetness, but it also has balls.

It is a unique two channel combination of clean, transparent preamp / booster and rich overdrive / distortion that can work independently.

Detonator channel is an extremely versatile drive that takes your tone from light crunch, through rich, fat overdrive, all the way to tight distortion. Two toggle switches are responsible for different tonal and gain shapes, and with two-band active tone control, any desired frequency is easily cut or boosted. Another original feature is a Dynamic-O-Meter™ (Diktator’s eyes), which is a visual indicator of the drive’s dynamic response. 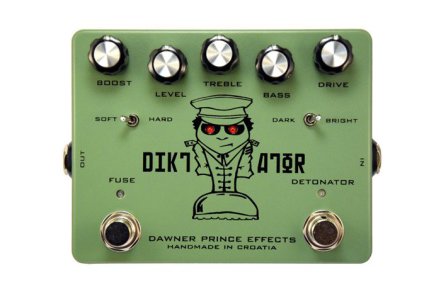 Fuse channel used alone is an ultra transparent preamp which refines the original tone, making your guitar sound bigger and easily pushes amplifier into the natural overdrive. Used in conjunction with detonator channel, it really hits your amp hard and is an excellent booster for lead parts, solos, etc…

All these features assure the Diktator's domination over your guitar tone and representative place on the pedalboard. Enjoy!

When we decided to revive one of the finest magnetic echo-delay machines ever built, we knew it will be everything but an easy task. Months of research, in-depth study, development and fine tuning were needed to bring it back in all its fame.

Boonar™ is an effects pedal precisely designed to deliver sound and feel of the legendary Binson Echorec, a multi-tap magnetic drum echo unit. Everything is in there and more: from thick, juicy tube tone, glorious multi-dimensional echo repeats melted with haunting reverb decays, variable delay time up to a full second and separate playback heads switching system to an amazing and distinctive external looks dominated by a gold finish and green pulsating "magic-eye" level indicator, all packed in an incredibly compact stompbox form.

Boonar shares the same analog signal path as original Echorec but we used high voltage driven FETs as tube emulators and replaced magnetic memory drum with a DSP unit. We developed a special DSP code that faithfully replicates all the characteristics of the actual Binson memory system that we named a virtual magnetic drum.

Reveal an authentic Binson sound and enjoy in magical echoes of the past! 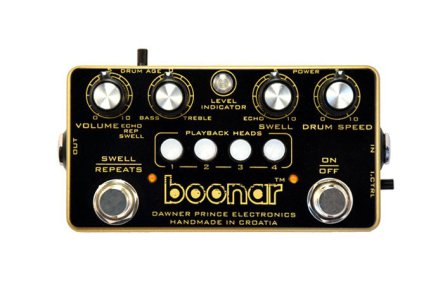 VOLUME echo/repeat/swell
controls the output volume of the delayed signal coming from the playback heads. This control is based on Input control setting.

BASS/TREBLE
adjusts the EQ of the delay signal. Just like in original Echorec machine, this effect is subtle, changing from darker to brighter.

SWELL (LENGTH OF SWELL)
sets the amount of regeneration/number of repeats from single repeat (slap back delay-Echo mode) of each playback head to infinite. On the edge of self - oscillation Boonar will start to produce those specific luscious swells that bubble, creating a complex multi-dimensional wall of sound.

DRUM AGE
this control adds all those sweet aging characteristics specific to Binson Echorec. When new Echorec repeats are bright, metallic sounding and repeat pretty accurately since magnetic drum was quite an improvement over magnetic tape. But with aging there is a slight loss in volume and high frequencies due to a wear/poor playback heads alignment and a very unique modulation is introduced in the delay signal. This modulation is mostly caused by worn mechanical parts that start to irregularly drive the memory disc/drum and unlike other delay modulations this one is more of a vibrato than a chorus effect.
With Drum Age control set to zero (fully clockwise), there is a minimum aging effects present in the delay signal. Increasing it to 12 o'clock will add a subtle amount of modulation producing a pleasant wow effect, while on maximum will introduce a nice warble with noticeable loss in high frequency and volume on the playback heads. Another important characteristics is that Drum Age modulation frequency (the rate of the warble effect) is directly proportional to the Drum Speed - as the drum speed is increased, so is the rate of the warble and vice versa.

A lot of time and hard work went into recreating all those characteristics, meaning carefully measuring all the parameters on the actual machines and transferring them into the Boonar's DSP - virtual magnetic drum.

INPUT CONTROL
controls the level of the input signal to the delay path. This control enables Boonar to accept all kinds of instruments with various signal levels on the input. Cranking the Input Control all the way up will produce those beautiful overdrive effects on the delay, specific to the Binson Echorec.

PLAYBACK HEADS
Binson Echorec had a 12-position rotational switch that was used to select different playback heads and combinations for single and multi-tap delay. We wanted to overcome that limitation and added a separate playback heads switches for a maximum of 16 possible head combinations. All four playback heads outputs are true analog.

LEVEL INDICATOR
The Level Indicator called a "magic-eye" displays the level of input signal and repeats.

SWELL/REPEATS
switches between standard Repeats mode - a multiple repetitions depending on the Swell control potentiometer and a Swell mode which puts a portion of signal from all four playback heads into the output mixer to produce those reverb - like, "cathedral tone" effects.

DRY VOLUME (KILL DRY)
internal trim pot sets the level of the dry signal coming from the preamp into the output mixer. It is factory set to unity gain.